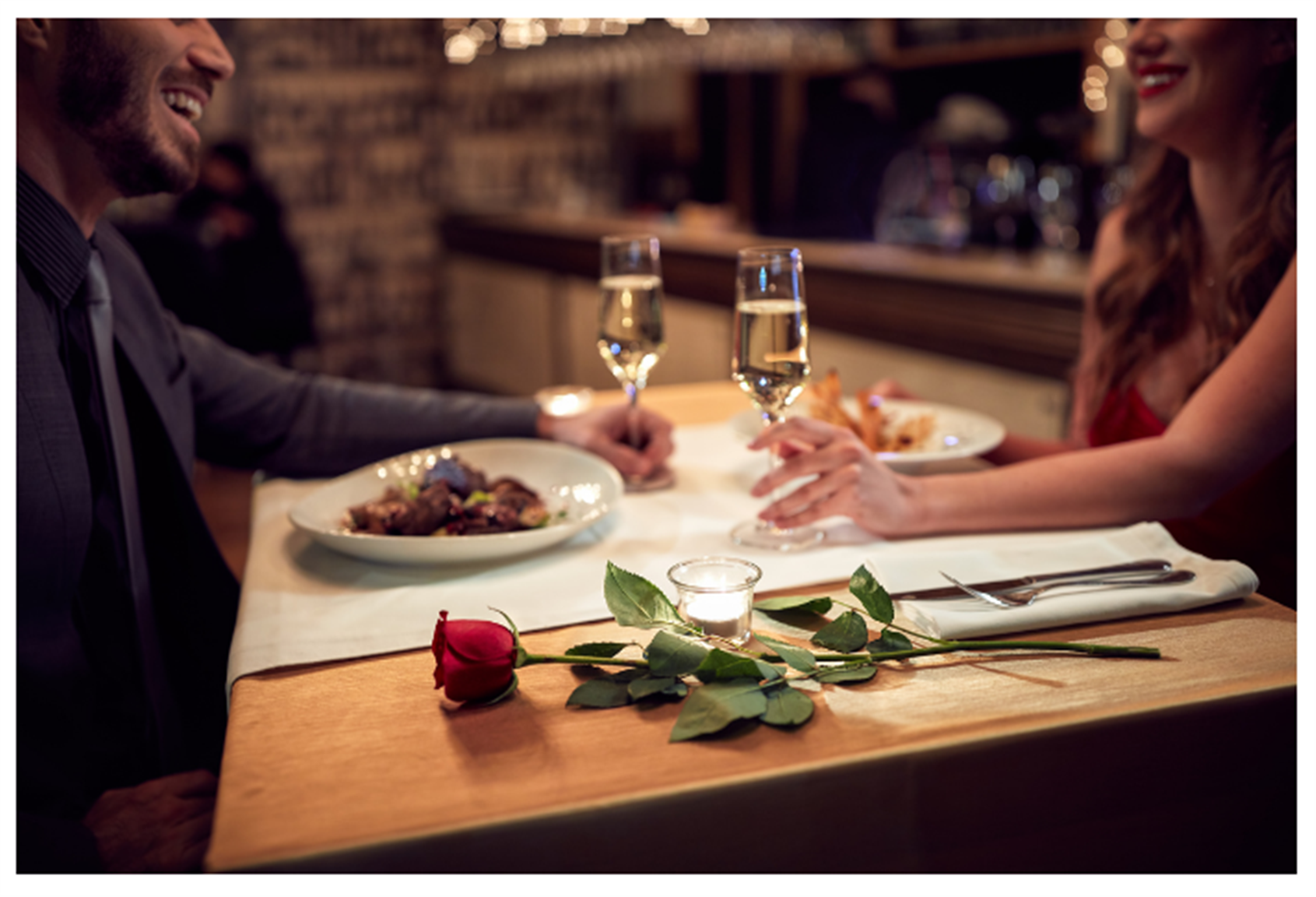 Valentine’s Day is the most romantic day of the year and whats more romantic than dinner for two, holding hands and free food? If tonight, your heading off to a romantic dinner, make sure to check the list below and score discounts or even free food at your favorite restaurant. Your sweetie will be so impressed by your savings abilities, who know where the night will lead.

Hooters:
The deal: Bring in a photo of your ex, deposit it in a shredder and you’ll get 10 free boneless chicken wings when you buy 10 other wings. February 14 Only.

Burger King
The deal: Select locations will let you drop a photo of your ex in a “breakup box” to get a free Whopper. If you aren’t near one of those locations, you can take an in-app quiz to land a $3 Whopper. February 14 Only.

7-Eleven
The deal: Place any order at 7-Eleven through Postmates and get a totally free pint of Ben & Jerry’s. Just drop in the code “happyvday.” February 10-16.

Qdoba
The deal: Get BOGO entrées on Valentine’s Day when you kiss someone or something at the counter. Weird, but true. February 14 Only.

Chipotle
The deal: Get yourself some free guac this month. Existing and new Chipotle Rewards members can get free guacamole by texting “Guac Mode” to 888-222 or going to chipotle.com/guacmode. Through February 20.

Chick-Fil-A:
Get 30-count Chick-fil-A Nuggets, 10-count Chick-n-Minis and 6-count Chocolate Chunk Cookies in a heart-shaped container. These special trays will be available at participating restaurants for a limited time, Now through February 29th or while supplies last.

Tim Hortons
The deal: Get a free heart-shaped donut with the purchase of any beverage. February 14, 2pm-close.

Moe’s Southwest Grill
The deal: Buy a burrito through the Moe’s app, and you’ll get a free side of queso. That’s truly a soul-mate level match. February 14 Only.

Freebirds World Burrito:
Order a burrito, bowl, taco, or salad, and you’ll get a free side of queso. February 14 Only.

Pizano’s Pizza & Pasta:
The Chicago-based pizza shop is making frozen heart-shaped pizzas for Valentine’s Day. You’ll get one thin-crust heart-shaped pizza for free when you order a two- or four-pack of mix and match pizzas. They can be shipped anywhere in the continental US. February 14 Only.

McAlister’s Deli:
The deal: Kids are going to eat for free at participating locations. February 14 Only.

Cicis:
Land a free Kids Buffet when you purchase an Adult Buffet with a large drink, using this coupon. February 14 Only. 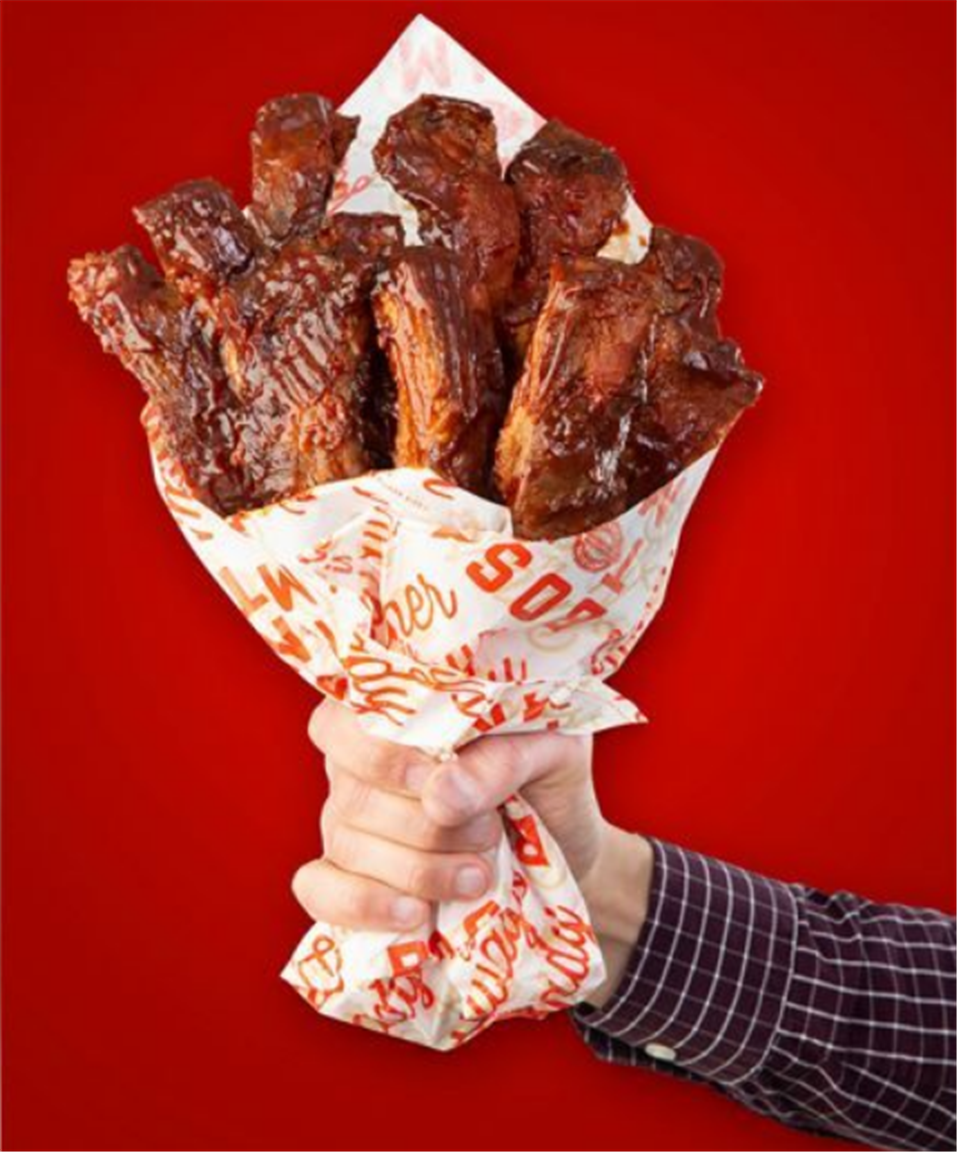 Boston Market:
Buy your loved one a bouquet of 12 Baby Back Ribs for $29.99. It’s exactly what it sounds like. February 14 Only.

Fresh Brothers:
Get a large heart-shaped pizza with a “super cute lovey-themed pizza cutter” for $16.50. Through February 10-16.

Mountain Mike’s Pizza:
Trim $3 off any large pizza order with the similarly memorable code “825959.” Through February 26.

Pie Five Pizza:
You and your valentine can grab two personal pizzas for $10.99 when you order online. Some locations may also have the deal available for delivery. To get the code for the deal, check the Facebook page of your local Pie Five location. February 14 Only.

Nékter Juice Bar: Sign up for the Nékter Juice Bar Loyalty app on Valentine’s Day, and you’ll get a BOGO deal on a 16-ounce Pink Flamingo Smoothie. February 14 Only.

Mimi’s Bistro + Bakery:
Grab a three-course Valentine’s Day meal for $19.99 per person. It’ll come with soup or salad, an entrée, and dessert. February 14-16.

Chuck E. Cheese:
Upgrade your large pizza to an XL for free at the home of pizza mouse. Through February 14th.

Taco Cabana:
Grab a Shareable menu item and a pitcher of beer for $12.99 all day. Those Sharables include Kickin’ Grande Nachos, Trio Sampler, or Dippin’ Trio. February 13-14.

Tony Roma’s:
Bring a friend or partner in for a four-course meal to share. It’ll be just $60 for the whole thing at participating locations.  February 14 Only

Carvel
To get something special for your valentine, you can take $3 off a sheet cake using a coupon at carvel.com/coupon. February 3-14.

Mrs. Fields:
Drop the code “LOVE” to get 15% off an online order. February 14th Only 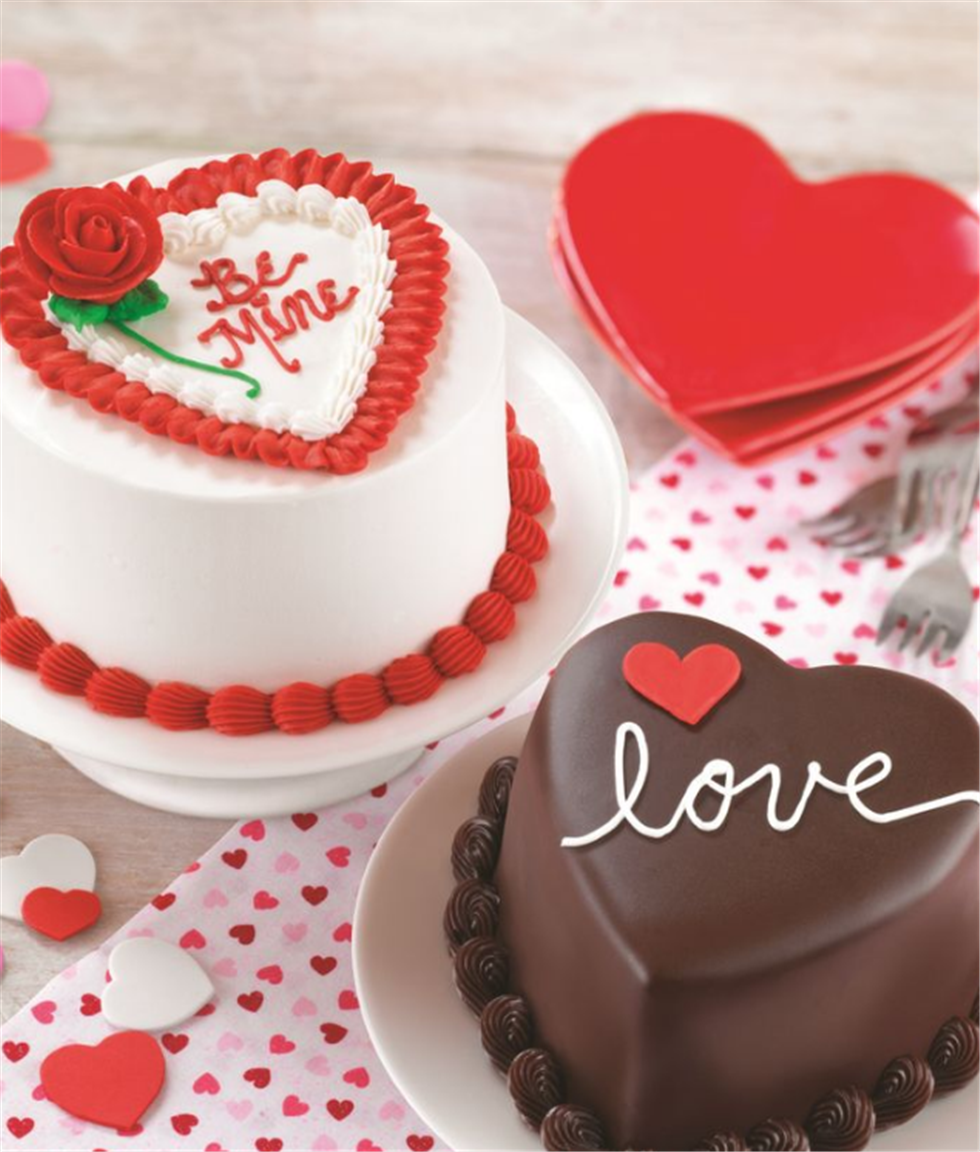 Baskin-Robbins:
Order an ice cream cake for your valentine. You’ll get $3 off a cake of at least $15 with the code “bemine.” February 14th Only.

Wine Insiders:
For Valentine’s Day, The Wine Club is offering a “Will You Accept This Rosé” pack that lands you six rosés for $87. If that’s not your bag, you can take 30% off anything with the code “valentine30.” Through February 15th.

Marie Callender’s:
For Great American Pie Month — why pass an excuse to celebrate pie? — select whole pie can be had for as little as $7.99.  Through February 29.

Sauce Pizza and Wine:
Come in with an eating partner to get a meal for two for $25. That includes a hand-tossed salad, 12-inch pizza, and two glasses of wine. February 14th Only.

Davanni’s:
Throughout Valentine’s Day weekend, you can get medium thin-crust pizzas in the shape of a heart, and you can get brownies for just a buck. Through February 16th.

Jeremiah’s Italian Ice:
Get a large Gelati for the price of a small. February 14th Only.

Verve Coffee Roasters:
A Valentine’s Day package with a Dune Muggy Insulated Miir Mug, candle, and 12-ounce bag of Verve Coffee will run you $45, which is 10% off the usual price. February 14th Only.

Yalla Mediterranean:
Kids eat free every Friday. You’ll have to mention the deal to the cashier or use the code “KIDS” when ordering online. You’ll get one free kids meal per adult entrée. Ongoing on Fridays, 4pm-close.

Other Deals on Valentine’s Day

Chili’s
The Margarita of the Month is the Hearts of Fire ‘Rita with tequila, Fireball Whiskey, and Maker’s Mark Bourbon. It’ll run you $5.
Through February 29th. 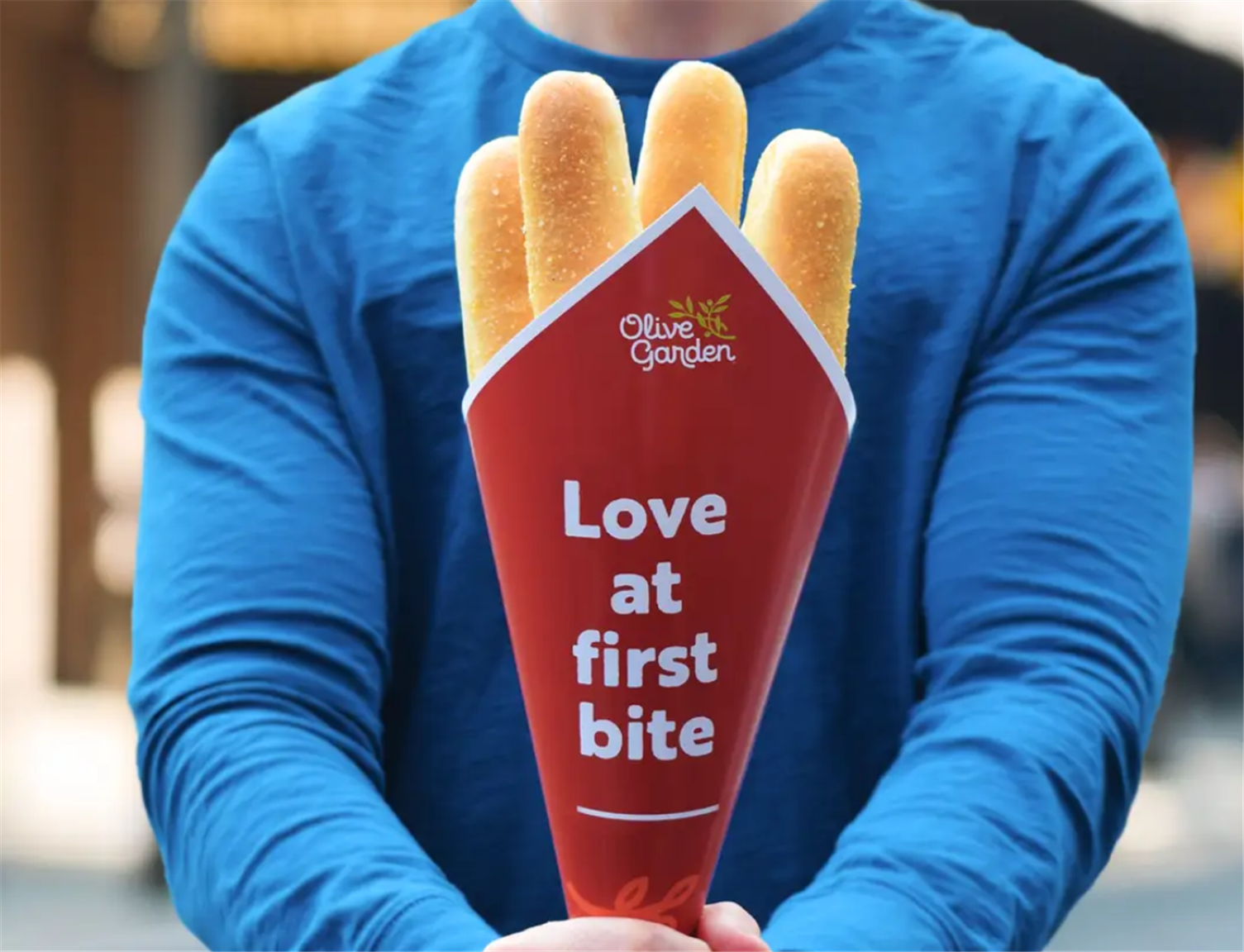 Olive Garden also has made its $5 Take Home promotion a permanent offer. When you order an entrée in-restaurant, you can get up to five $5 Take Home orders to go along with your order. Olive Garden, however, will not clean out your office microwave when you reheat it for lunch the next day. That’s on you. Ongoing.

Jimmy John’s:
The sandwich shop announced its Freaky Fast Rewards program is going national on December 9. To celebrate, you’ll be rewarded with a free eight-inch sandwich following your first order through the app. Ongoing.

Grimaldi’s:
Stoking Social Hour goes down from 3:30-6pm today and you can get $15 off non-house bottles of wine, $2 off draft beers, and $3 off glasses of wine, signature cocktails, antipasto, and bruschetta. It’s a good time to drop in. Daily Deal.

ezCater:
For National Bagel Day (there are multiple ones for some reason), ezCater is offering $25 off a catering order of at least $100 with the code “2020BagelDay.” February 14th Only.